Osteopathic diagnosis and treatment of the lymphatic system, the key to CFS/ME and fibromyalgia

Fluid draining through perivascular spaces into the (g)lymphatic system.

A postgraduate course that will give you a completely new insight, clinical approach and dramatical increase in therapeutic success.

For registration go to: https://www.osteopathy.academy/en/node/730

The key element in your clinical work. The recent findings support the hypothesis that Chronic Fatigue Syndrome/Myalgic Encephalomyelitis is a disorder of retrograde lymphatic drainage leading to neurotoxic build up within the central nervous system leading to physical signs that have been recently validated in a blind controlled trial in the UK (Hives, 2017) and can be treated using techniques developed over the past three decades to restore a healthier neuro-lymphatic flow.
It is possible that many other neurological disorders such as Alzheimer’s , Motor Neurone Disease, neuro-borreliosis and possibly some psychiatric disorders that still baffle medical science may share a similar pathophysiological disorder affecting the neuro-lymphatic drainage system.
Experience the lymphatic continuum in its structure and function, boost your results in the clinic and accelerate your recovery speed.

Ever since Aselli first documented the lymphatic system nearly 400 years ago there has been one basic consistency within the medical world whether orthodox or complementary regarding this incredibly important part of the human anatomy and physiology which is involved in every pathology to affect our health and that is Ignorance.

The ignorance is not usually the fault of the practitioner it is the educational system that lays much more emphasis on the other important systems of the body for example the cardiovascular-respiratory , gastro-intestinal and in osteopathy the neuro-muscular skeletal systems. However healthy lymphatics are paramount in all these systems and we as osteopaths need to go back to our roots as Andrew Taylor Still said: “illness is mainly due to stagnation of body fluids and that if you can stimulate blood flow and other fluid motion including cerebro-spinal fluid and lymphatic drainage then the body will recover” Stagnation in the lymph results in “fermentation, fever, sickness and death.”

When asked about the “eternal truths” of osteopathy, Dr Still responded, “[Those truths] are found in the spinal column with all of its intricate bony framework, plus the beautiful circulation of blood and lymph through the nerve centers of the spinal cord and throughout the whole body.”

Sutherland stated: “When you tap the waters of the brain by compressing the fourth ventricle see what happens in the lymphatic system. Visualise the lymph node that is holding some poison that has gathered there, changing the constituency before the lymph is moved along into the venous system”

Still admitted, “Possibly less is known of the lymphatics than any other division of the life-sustaining machinery of man.”

Learn the techniques of osteopathic luminaries such as Millard, Barber, Miller, Millie, Zinc, Sutherland and even Still himself. As well as understanding seminal lymphatic techniques of Vodder & Chicky.

Osteopathic diagnosis and treatment of the lymphatic system, the key to CFS/ME and fibromyalgia

Fluid draining through perivascular spaces into the (g)lymphatic system.

A postgraduate course that will give you a completely new insight, clinical approach and dramatical increase in therapeutic success.

The 3rd Nordic Osteopathic Congress titled ‘Finding and Supporting Health 2.0’ will take place from the 30th until the 31st October, 2021. The event is held and presented on-line from Helsinki, Finland. 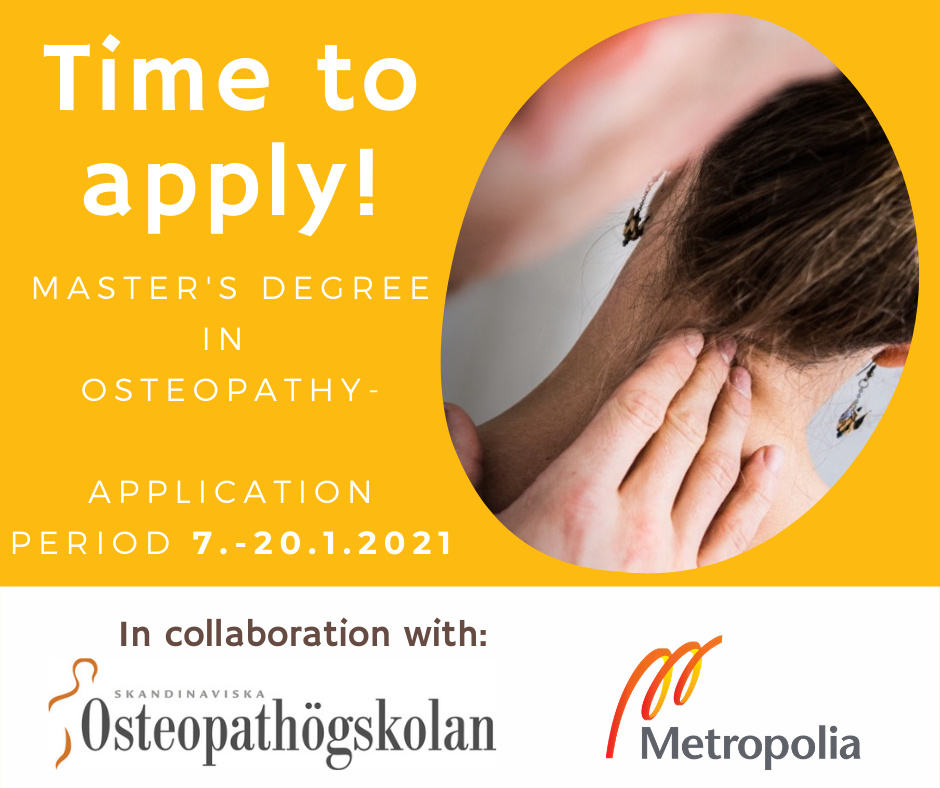 Here are some exciting news from our member METROPOLIA University of Applied Sciences. They are offering a new
Master’s Degree Programme in Osteopathy
Dear Colleagues,
in these challenging times we would like to share some good news with you: A brand-new online Master’s Degree in Osteopathy designed as a 2-year distance-learning programme specially for practicing osteopaths with at least two years of work experience. The language of instruction English and studies begin in September 2021. For EU/ETA citizens the tuition is free. The application period is open until 20.1.2021. Feel free to share: https://www.metropolia.fi/.../masters-degrees/osteopathy

Metropolia University of Applied Sciences warmly welcomes faculty members and students from its current and future partner institutions to exchange knowledge, experiences and ideas as well as to create collaborative networks. Metropolia´s Innovation Hubs are the inspiration for the themes in 2021.

Osteopathy and White Nights - postponed to 2022

Unfortunately, the pandemic restrictions and unpredictable behavior of the pandemic in the next six months do not allow us to start preparing for our International Osteopathic Conference "Osteopathy and White Nights", which we planned for spring 2021. We made a difficult decision to postpone it to 2022.

New dates of the International Conference "Osteopathy and White Nights" "Osteopathic traditions as the basis of professional development" are 3rd to 5th June 2022.

Birth Issues and Diagnostic Skills in Working with Babies

This postgraduate course helps the osteopath to understand the birth process from the baby’s perspective.

The course starts with an introduction in the pre- and perinatal psychology.

Starting from this perspective, the 4 phases of the birth process are explained, and these are linked to the possible physical challenges the baby might encounter during the birth process and the repercussions on the baby’s emotional wellbeing. These experiences can have its consequences for both the neurological and physiological development and are co factors in determining the behavior in the future life.

A postgraduate course specifically designed by and for women, with all the modifications that really work. You learn how to focus and position yourself and the patient, so you can thrust easily patients that are taller, bigger, stronger or heavier than yourself, with minimal effort. Men are also welcome.

The course is 100% practical and all session will be individual supervised, allowing every attendee to: